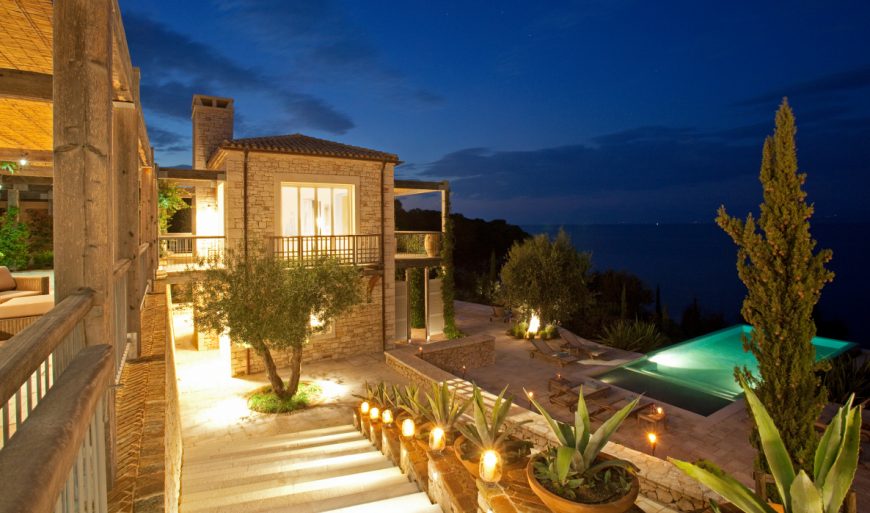 Established in 2003, Skopos Design offers a qualified and experienced garden design and architectural service to both private and commercial clients throughout the Mediterranean.
Skopos Design is a partnership of combined services which are listed below. Our portfolio of work includes large private gardens, villa design in partnership with qualified engineers.

In Cooperation With : North East Corfu 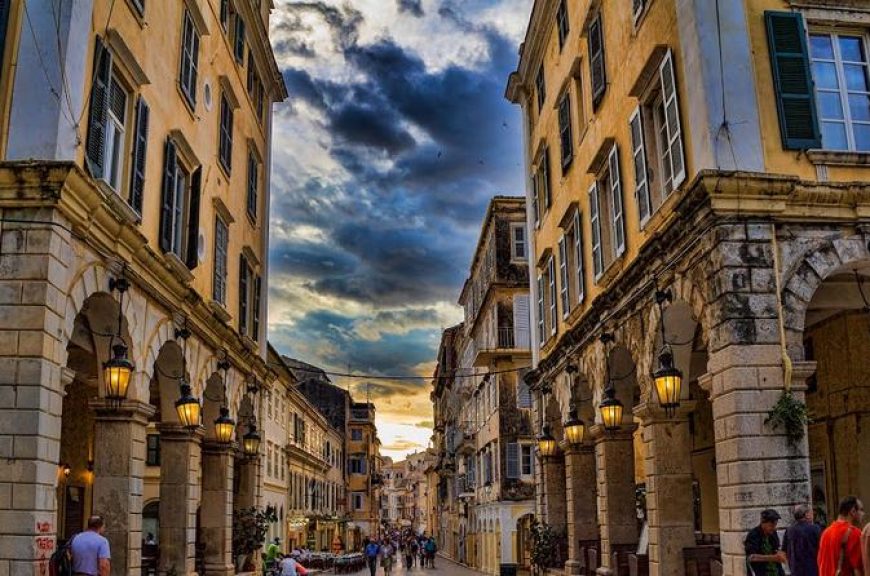 It is clear that the architecture of Corfu was sealed in the 18th and the 19th century with various examples of buildings that have made Corfu Town one of the most impressive European cities.

Even from antiquity, Corfu was a fortified city with two ports and the agora surrounded by impressive buildings, palaces and forts. During the Byzantine era, Corfu island was constantly raided by pirates and at that time many fortresses and castles were built like the Angel Castle, the Gardiki Castle and the impressive Fortress of Saint Mark, also known as the New Fortress in Corfu Town.

Its all too easy to wonder away from the few busy streets and find yourself in another era, narrow streets between tall buildings with cloths hanging to dry between balconies, old people looking after their flowers, had it not been for the annoying presence of cars and scooters, it would be a scene out of a Hollywood film about Venice.

This small but colorful city has an addictive quality which cannot be explained, only experienced, there are countless people who have fallen for this mysterious attraction, some just keep coming back, some simply never left.

You can see here some Venetian buildings from Corfu Town.

Top 5 Things To Do in Corfu 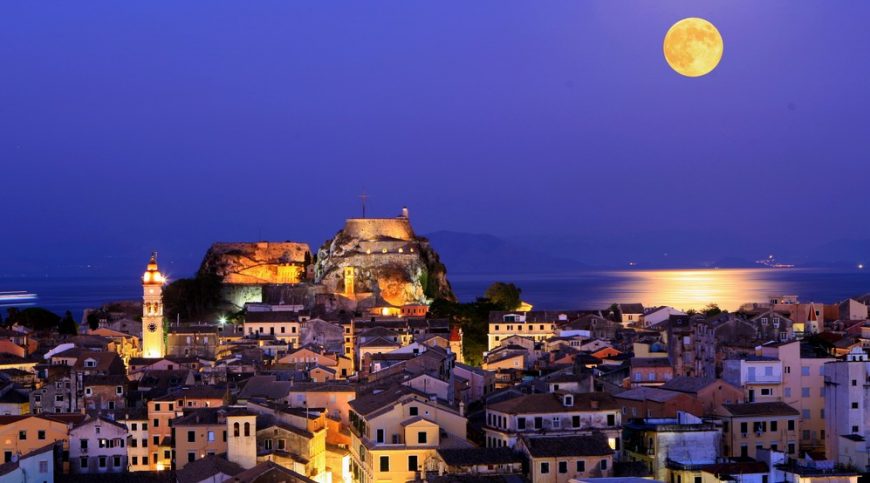 TOP 5 THINGS TO DO IN CORFU

Corfu has been realized with a purpose to offer the most complete guide for the Greek island of Corfù.
In this article we will give you our suggestions to discover Corfù island through its beaches, its historical background, its museums and traditions, giving also a big space to the charming Corfu old town.

Palace of St. Michael and St. George
The Palace of St. Michael and St. George is a palace in Corfu City on the island of Corfu, Greece.
Commissioned by Sir Thomas Maitland, it originally served as the residence of the British Lord High Commissioner of the Ionian Islands.
It was built between 1819 and 1824, to a neoclassical design of Colonel George Whitmore. It was the first Greek Revival building to be built on the territory of modern Greece.
The building is also known as the Royal Palace, the City Palace, or locally by the Greek name Palaia Anaktora.

Liston
Corfu Liston was constructed in the first decade of the 19th century and its construction lasted for some decades. The desire to build was the imperial and French design, the pattern follows that of the rue de Rivoli, Paris.

The name Liston presented to resources only in the late 19th century and early twentieth. Leonidas Stanellos in Corfu of “Liston book” reads interesting: ” In the Venetian dialect word” liston “, like the word” lista “and” lizza “have the same meaning as the words” striscia, stricca “. These words mean a piece of any material whose length is greater than the width . ” Yet, “In Corfu, the name “liston” exists since the 18th century., Referring to the wooden structure -liston- that were made for the needs of the ceremony of the “ingresso” (new arrival ceremony Intendant). ” H construction that were erected on the road that connects the Old Fortress MP town along that the current pathway B. Dousmani. If we combined the specific route named “liston”, this was done by reference to the wooden structure the “ingresso “.

Achilleion
Achilleion is a palace built in Gastouri on the Island of Corfu by Empress (German: Kaiserin) of Austria, Elisabeth of Bavaria, also known as Sisi, after a suggestion by Austrian Consul Alexander von Warsberg. Elisabeth was a powerful woman obsessed with beauty, but was deeply saddened by the tragic loss of her only son, Crown Prince Rudolf of Austria during the Mayerling Incident in 1889. A year later she had this summer palace built in the region of Gastouri, about ten kilometres to the south of the city of Corfu in formerly, the municipality of Achilleio; now part of the Corfu municipality. Achilleion’s location provides a panoramic view of Corfu city to the north, and across the whole southern part of the island.

The architectural style was intended to represent an ancient palace of mythical Phaeacia. The palace was designed with the hero Achilles of Greek mythology as its central theme, and from which the name is derived. Corfu was Elizabeth’s favourite vacation place and she wanted a palace to gratify her admiration for

Pontikonisi
Pontikonisi is a green and tree-lined rock, located at the entrance of the Halikiopoulos lagoon, opposite Ioannis Kapodistrias Corfu Airport.

This rock is one of the most popular and well-known tourist attractions of Corfu. It is under the jurisdiction of the municipality of Corfu and in the last few years various infrastructures, such as the construction of a pier, have been built to accommodate the various boats and boats, which during the summer months make the transportation with the rock from Kanoni, Perama and from the monastery of the Blachernae in Kanoni.

3. Swimming at the beautiful Canal d’Amour

Canal d’Amour is one of Corfu’s most impressive natural wonders. Marvel at the looming sandstone rock formations that stretch from a small beach into the Ionian Sea. Swim through caves and tunnels or watch local residents jump off the rocks into the warm blue water. Take advantage of unrivaled photography opportunities that capture Corfu’s fascinating landscapes. Canal d’Amour sits on the northwestern tip of Corfu, a short walk from the village of Sidari.

The massif Pantokratoras is ideal for mountain bike, with routes suitable for both beginners and skilled bikers. You can either join organized downhill runs and races, or to chose your own downhill run through picturesque roads or through signed pathways.
From the top of the mountain till the beaches in Acharavi, there are 17km of alternating natural scenic and picturesque villages and a view as far as Diapontia islands.
On the top of the mountain the altitude is 917m, and for mountain bike fans there are 12 routes.
Besides the mountain, there are also the coastal routes and the routes out of settlements. Roads and pathways in a row, from Almyros and Antinioti lagoon up to Agios Stefanos and Erimitis, offer bike routes suitable for beginners and experts.

Υou can visit the hidden bars where they are hidden inside the Corfiot Straits for a different experience. Also you can find the special corfu beer wich is one of the top 3 best beers in the world.

– These were the best TOP 5 things to do in Corfu and if you fall in love with the wonderful places, then you can visit our site  ” NORTH EAST CORFU ”  to get informed about Luxury Villas, Properties and Lands so you can stay and live your dream!

Find your apartment or house on the exact key parameters.

Plot of 4.100 sqm on a hill above Kassiopi Kassiopi Contact us for pricing 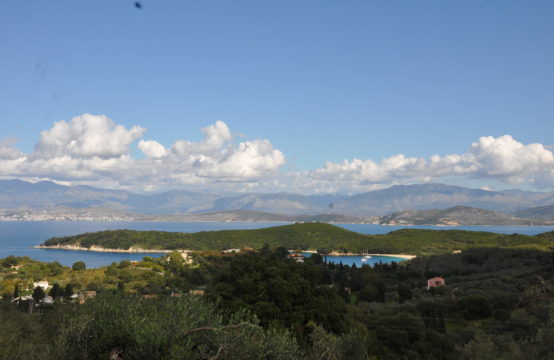